The Documenting Has Changed, Will Schools Adapt?

In the arch of interacting with social media, a definite trend appears to have staying power. That trend is people documenting the funny remarks made by their young children.

I spend very little time on Facebook, and extraordinarily too much time on Twitter. Many of the truly laugh-out-loud moments I have with Facebook occur when my wife reads aloud a direct quote posted by a family member or close friend. These quotes often involve a kid said, adult response, then kid punch line rhythm. Here are two examples: 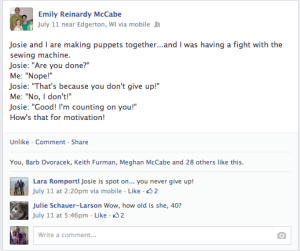 Over the past few decades, have young humans increased their ability to make connections, use language, and cause people to laugh?

I don’t know. I have not researched those questions, but I want to share a hunch. Here’s what I think used to happen, when my parents were raising me and my sisters, circa 1980’s-90’s, the process for sharing funny moments was very different than the process now. The previous process involved the retelling of a funny moment or phrase either in person or over the telephone. Whereas, current practice includes going to Facebook, posting the dialog, and receiving feedback from members other than just close family. Over 30 Likes when my wife posts a conversation between her and our 4-year old. This folksonomy of not only language development, but personhood development is created in real-time, and I have two big questions.

1. What are the externalities associated with this type of documenting? I was struck today for the first time in a long time. And I mean, I was struck with a big idea. I’ll get to that big idea in a moment, but first, what will it be like when my daughters are in their mid-teens and we play the classic car game, “remember when.” Will they have embedded tech pulling up direct quotes from 2011, 2012, and 2013 to pull back the exact conversation? And if so, what does this type of narrative do to the teens construction of their identity? Especially, if the narrative is documented through the lens of the adult? In both of the Facebook posts above, Josie does not go back to what my wife or I wrote and provide feedback. She does not have the ability to delete or remove the post.

This morning, I got to thinking about the collection of kid quotes on Facebook. My thought patterns were jumping a bit, they went from…—

I wonder if all of these posts will be aggregated into something really nice and clean?

What will wedding slideshows look like for my kids?

I really want to have another cup of coffee.

2. What would school be like if each classroom or learning group had a full-time documentation specialist?

The method for documenting has shifted. Not just documenting dialog, but also documenting activities, pinnacle moments of achievement, and failure. I just finished facilitating a Minecraft Lab. Twenty five learners ages twelve-ish to fifteen-ish spent four hours a day doing extraordinary work. They gave up their summer to come to school and not just play video games, but build, create, explore, kill, fail, team-up, and dream. The kids arrived early, they stayed late, and they refused to take breaks. I’ll post more on this experience at a later date, but the realization for me as the facilitator and designer of the course was that I was drowning in content. I’m currently working on documenting all of their great work, and after just three weeks, I have nearly 7GB of content. That amount of video and photos would have filled up my $2200 Dell Dimension 4200 desktop computer I took to college in the year 2000. [Sidebar: my highly skilled colleague facilitated a Coding Lab with extraordinary success! Follow-up post to come].

Big idea: You know how many traditional classrooms in the United States with a high percentage of students with disabilities have an adult in the room to carry out the Individualized Education Plan- what if each classroom with a high number of content creators had a documentation specialist? (forgive the run-on)

For the past two years, I worked in two different schools as an advisor. These schools were multiage, and served 12-18 year olds. I had a multiage advisory of fourteen to seventeen students. I had a very difficult time keeping up with documenting the students learning. Whereas, the year prior (2010-2011) I had two different groups of eight students. It was much easier to document the learning of the group of eight.  If the learners are learning, and the teachers are facilitating, then who is the person playing the role of updating the learning in real-time and curating the content? In the case of the example used previously, who is the person in the role of updating Facebook about the clever comments just made by the toddler?

The laggards who like to draw math equations with chalk and think WolframAlpha is cheating may say, “It’s the job of the student.” No. Not always, the student is learning. And documenting is huge, but if all the student cares about is getting the exact perfect screenshot or framing a conversation just the right way for the camera, then isn’t a portion of the authentic learning lost?

The SuperhumanmultiawardwinningGoogleCertifiedAppleDistinguishedEducatorteacher may say, “It’s the job of the teacher.” Yes. But not always. The teacher/advisor/facilitator/designer is doing what they do. And putting all of the responsibility on that one individual is too much to ask; especially, in the era of over standardization whereby accountability is measured by dreaded four letter tests. I have seen and worked with amazing teachers who document learning (See: https://twitter.com/PrattsClass_WDL for an example of a sixth grade writing seminar/workshop and Twitter). Art teachers using Tumblr, Enter name here using Facebook Pages, Specific projects creating Twitter accounts and blog sites (my personal favorite http://jdalgameclub.blogspot.com/); all of these instances of learning being documented are happening in places all over, but what’s not happening, is a coherent organization for documenting learning. How do we document learning in a manner that is scalable, sustainable, individualized, meaningful, and have it lead to richer learning opportunities?

The more I code, shoot jumpers, or write, the better I will be (not trying to dive into a mastery debate here, so please provide a bit a latitude).  Shouldn’t we take those same principles and apply them to documenting learning?

This past year, I was fortunate enough to work with over forty different pre-service teachers, they were students at the local university. A handful of which, I would love my own kids to one day have as teachers. Another handful of which, I would elect to homeschool my kids before having these humans “teach” my own children. And the great majority fell into that too soon to tell and lots of potential category. What struck me about many of the college level sophomores and juniors, was their inability to interact with students on the fly. The environment in which these future-teachers stepped into was very different from any other school most of them had ever been to. Student-directed project-based learning provides more agency to learners than  most pedagogies, and I think people feel that when they walk into a school. I think they feel that, “Whoa, this is different. No bells, no grades, no subjects.” But what shocked my senses, and what I repeated to my colleagues several times was this:
“I don’t get it, wouldn’t you think they (human paying large amounts of cash or debt to join teaching profession) would dive in and meet the students where they are at? Don’t they have passions to share?” I was never told by my colleagues to cool out, cut them slack, or get positive. It was a collective befuddlement.

Then, about half way through the school year of 2012-13, I had an epiphany. Many of these college sophomores and juniors would have graduated high school between 2010-11. Tracing the arch of their learning backwards, many of these college sophomores and juniors would have been in grades six or seven in 2004. Meaning, most of these students did most of their schooling during the standardization era. I cannot imagine how I would have developed, or the vocation I would have been called to had I been forced to sit through as much standardized testing as the students who have graduated high school over the past half dozen years. That was my epiphany.

Over the last few months of the school year, I started talked to future-teachers who fell on each end of the spectrum. The superstars, they had a story. They had a reason to teach, they were right out of a Parker J. Palmer carved narrative. The turds, well, here’s my favorite back and forth:
Me: Why do you want to teach?
Turd: I dunno.
Me: What are you going to do if you cannot get a job teaching high school social studies in either of the Districts you plan on applying?
Turd: Me, oh, well, I dunno. I’ll prolly just get a job with the city or county- same pay and benefits you know, and prolly even easier job.
He was clueless to my backhanded insult I added in later in the conversation when I asked him about being one in four hundred applicants. While at our school, he sent more text messages than any other student. Now, juxtapose the turd with the superstar. We had students from the local university lead group projects in which a gigantic dragon was constructed out of recycle materials. We had future teachers who created a workshop to teach people how to play the piano. We had future teachers who volunteered their time to pioneer a math lab in the summer time. We had future teachers who played at our first ever graduation ceremony and contributed to making the night a truly special occasion.

So here’s an idea, and maybe even a possible solution. What if pre-service teachers, serve as documentation specialist? Here’s how it would work: classrooms where content is being created at a high rate, think superhumanmultiawardwinningGoogleCertifiedAppleDistinguishedEducatorteacher rather than chalk, each of these classrooms would have an aspiring teacher putting in time to use tech tools to take pictures, video, screenshot, snapshot, capture, and interview. It’s a win/win. The best documenters would get hired on by the District; probably, for a lucrative wage of $9 an hour, but that’s equivalent to what they’d be making working the counter at Jimmy John’s and slightly better than most baristas. I am for teaching as an apprenticeship model, and I think this would be a positive shift in that direction. Superstars are grabbed and not allowed to leave the room or the profession. Turds are flushed and provided a box of chalk on their way out the door.

Now, I ran this idea by my wife earlier today, and she said, “To what end? Who is doing what with the learning that’s being documented?” Admittedly, I don’t have an answer for that. Right now, putting the content together in an organized manner in which learners are free to interact, take, create, recreate, remix, curate, etc- right now that’s a hugh step forward. Right now, providing future teachers with high expectations, high supports, and a professional role is a step forward. Right now, this type of practice is a needed antidote to the forced testing in the Standardized Era.

I can’t wait to tell my Ma tomorrow about Margaret’s first pair of Jordan’s and what her big sister said to her in the car.

Do Work!
View all posts by Michael →
This entry was posted in Radical School Design, Reflection. Bookmark the permalink.